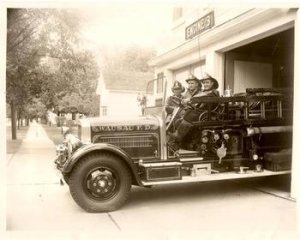 Plato said “Necessity is the mother of invention” ,and few communities have a greater need for fire protection than one built on the lumber industry. Though founded in 1849 around the rising sawmills, it took another twenty years and at least three disastrous fires for the lumber town to charter a fire department.

In 1864 flames menaced the town during the Great Fire of Wausau and saved only by the entire adult population lining a path from the river to the fire, handing buckets back and forth. Wausau considered fire protection a requirement in the year 1869 after two disastrous fires. The year started with the burning of the Daniels and Corey Saw Mills followed closely by a fire in the built up portion of downtown.

The downtown fire consumed the north side of Washington Street between Second and Third Street including the Music Hall which had just been built the year before and was considered the finest building in Wausau. To stop the downtown fire, an unburned portion of a building was torn down, while wet blankets were laid on the next building. As a result, on December 28, 1869, the Volunteer Fire Company No. 1 was organized and a hand pump was secured. The first Engine House of Wausau was built at a cost of $980.00. In June of 1892 the Ruder and Mathie breweries were burned to the ground, and the losses sustained by these fires helped spur the hiring of the first full-time firefighters.

By 1913 the department consisted of one Chief, 21 paid firefighters, three combination hose and chemical wagons, one hose cart, one hook and ladder truck, two steam fire engines and the chief’s horse and buggy. The full-time firefighters worked in seven-day shifts with just a 12-hour break before they would start another seven-day shift. It wasn’t until 1926 that a second platoon was added and they worked alternating 24-hour shifts. However, each firefighter was paired with another firefighter on the opposite shift, and if one was sick, or didn’t arrive to work, his “partner” had to remain at the station in his place. 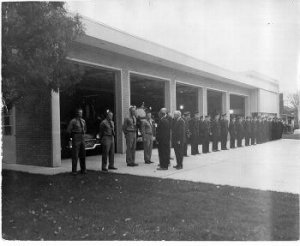 Ed Single was the first driver when motor-driven equipment was introduced to the Wausau Fire Department, a combination chemical and hose cart, and all of the horse-drawn apparatus were eventually replaced with the purchase of an aerial truck in 1926. Wausau Fire Department has a long history of providing fire-based EMS, starting under Chief Buss in the early 1900’s. In 1972, Wausau held the state’s first EMT class and continued its commitment to providing the highest-quality pre-hospital care by upgrading to the paramedic level in 2001. 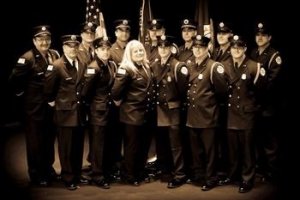 Local 415 members have a long history of upholding the IAFF’s dedication to MDA with past events such as the Firehouse Five Run, the Treadburner Bike Ride and most recently, the tremendously successful Firefighters Ride for MDA. Local 415 has raised $260,386 for MDA since 2000. Local 415 members also continue to give back to the community through other charities like St. Baldrick’s, bell ringing for the Salvation Army and participating in the recent pink-shirt campaign by the IAFF and PFFW. Starting on 9/11/1934 till now, members of Local 415 are proud to carry on the fire service tradition of sacrifice and service to the city of Wausau.

The following passage from the eulogy given at the funeral of August Lemke, a Hose Captain who died in 1901, describes the quiet selflessness that embodies our proud profession.

“… Often we have seen him surrounded by smoke and flame, drenched through and through in the cold winter night and never flinch. He never sent a man to a place of danger he would not go himself. He served his city and county well in other places, but was one of those silent modest men, who would rather shun than seek publicity…”